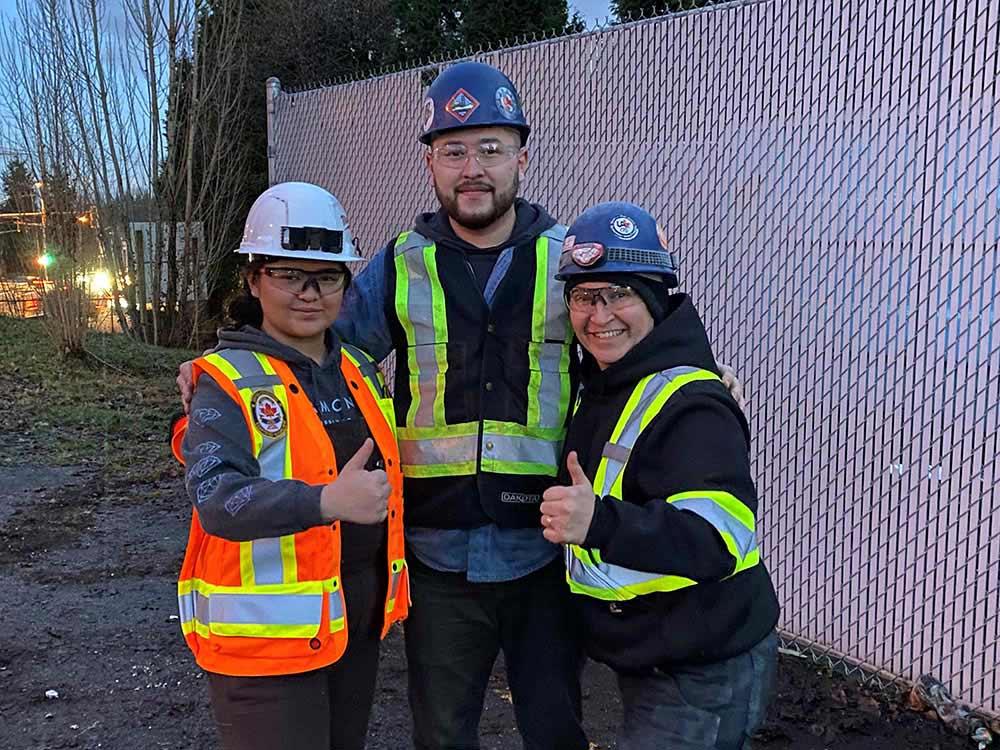 Surrey siblings Eisley and Jasmine McKay are following in their mother’s footsteps – or rather, her steel-toe boots.

And it’s easy to see why.

“They witnessed firsthand what having a career that you truly enjoy offers, the ability to not only survive but thrive if you are willing to work hard,” says mom Raven Hillenbrand. “They saw the financial rewards that a trade brings.”

When Eisley and Jasmine were young, Hillenbrand was a single mom trying to make ends meet. Hillenbrand hails from the Ganhada clan of the Gitxaala Nation, also known as the Git Lax Mo’on (people of the saltwater) Sagyt glum goot (of one heart), on the province’s Northwest Coast.  She moved her family to the Lower Mainland in 2009 seeking to expand her education and find meaningful career opportunities. She soon learned about a Women in Trades program being offered at the UA Piping Industry College of B.C. The program not only intrigued Hillenbrand, it included childcare and transportation, taking away two barriers commonly experienced by women supporting their families.

While the skilled trades are in high demand, offer competitive wages, and, with an apprenticeship, the ability to “earn while you learn,” women still represent only about five percent of tradespeople. But that’s starting to change, thanks to a growing number of programs and incentives specifically targeting women and other groups who are underrepresented in the sector.

It also helps having women in leadership and teaching positions, like Hillenbrand. Today, Hillenbrand is a Red Seal plumber, a class B gasfitter, and an instructor at the college.

And her children couldn’t be prouder.

“When other moms put on office or business clothes for work, mine wore steel-toe boots and work gear,” recalled Jasmine of her childhood. “She works hard and she’s good at her job. She’s a tradeswoman and I’m pretty proud of that.”

It doesn’t happen often, but Eisley has even had the privilege of working with his mom. In fact, he was one of her plumbing apprentices when he took his first year of schooling. Plumbing became a topic of conversation not only on the job but at the dinner table and beyond.

“She explains processes, tools, and tricks of the trade – she is a great teacher,” says Eisley. Hillenbrand says it was a thrill being Eisley’s mentor.

“I watched him grown and develop his skills, his confidence, and ability to do his job.”

Although Eisley was Hillenbrand’s apprentice, Jasmine has also benefited from the wealth of knowledge her mom offers, especially when she’s doing the technical portion of her apprenticeship. An apprenticeship in the skilled construction trades is typically a four-year program that combines classroom and on-the-job training.

“If I become overwhelmed, I’m in the best position because I have built-in support at home,” says Jasmine.  “I’ll take a break from training, give it some thought and start again, if when I can’t figure it out or need help, she shows me what I need to learn.”

Eisley and Jasmine have always been proud of their mom, but they’re even more in awe of her now that they’ve faced some of the same challenges that come with learning a trade, yet without the added stress of supporting two little kids.

“Growing up with my mom working in her trade, I saw all the work that went into it, the hours, the balance between work and home,” says Eisley. “My mom worked hard developing her trade, and she was able to look after both of us.”

The whole family belongs to the United Association of Journeymen & Apprentices of the Plumbing & Pipefitting Industry (UA) Local 170, headquartered on Annacis Island but with members throughout the province. Its training schools are located in the Lower Mainland, Fort St. John, and Terrace.

All in the family
Share the news
Scroll to top