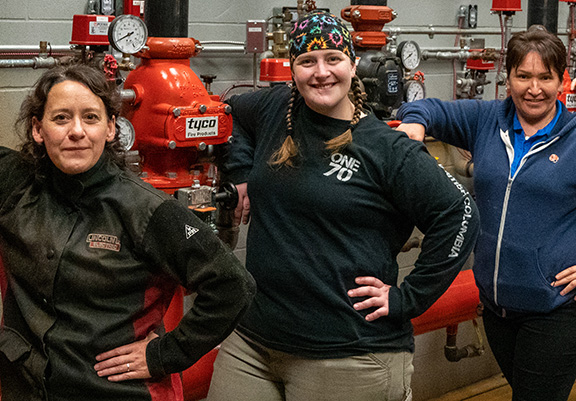 Never give up, ask as many questions as you want, and don’t be afraid of the oxy-fuel torch.

That’s some of the sage advice that instructors Dana Stevens, Raven Hillenbrand and Corinne Hagen have for their students at the UA Piping Industry College of B.C.

“We all make mistakes sometimes, but it’s how you come back from that mistake that creates your success,” says Stevens, who teaches welding foundations.

The trio represents 25 per cent of UAPIC’s teaching staff, which means the chances of getting a female instructor are high compared to a decade ago. And that’s positive news in an industry trying to increase the number of underrepresented groups in the trades.

“At my first job in a welding shop, they had to give me a special key for the office bathroom, because there was no women’s washroom on the shop floor,” remembers Stevens.

Hillenbrand, who is a Red Seal plumber and steamfitter/pipefitter as well as a Level B gas fitter, has already seen improvements during her 12 years in the trade. It’s come through increased support, funding and mentorship opportunities for apprentices, and women apprentices in particular.

Hillenbrand’s experience doing her apprenticeship through UAPIC has been so positive that she encouraged her son and daughter to follow the same path.

But there is still much work to do when it comes to equity and diversity in construction. Although many Building Trades unions have higher figures, women represent just five per cent of skilled trades workers in the wider construction industry.

“I think that women getting into the trades can be unnecessarily hard on themselves, and it’s important to remember to lean on each other for support,” says Hagen.

A woman apprentice may feel more comfortable speaking to a woman instructor when she encounters a problem in the classroom or even at the work site. Hillenbrand recalls one of her plumbing students calling her about some trouble they were having with a co-worker.

“The student didn’t know what to do because they felt they were being bullied and they were just going to quit that job,” says Hillenbrand. “I was able to direct them through the proper channels and they said after our conversation that their decision changed. That made my day.”

All the instructors agree that female students are often hardest on themselves, too.

“A few years ago, one of our welding students was struggling in the shop,” said Hagen. “After talking with her a bit, I realized that she just had an unrealistically high expectation of herself. I reminded her that this is the time to make mistakes and learn from them. I challenged her to not over-think it and to just weld and analyze the bead later. Sometimes getting started is the hardest part.”

One of Stevens’ students developed a fear of cutting torches, which is problematic for a welder, to say the least. After a little guidance and help lighting the flame from Stevens, the student “was making the cleanest cuts in the class.” The student cut a scrap heart for Stevens to show her appreciation.

“I kept it as a keepsake,” says Stevens.

Barry Donaldson is UAPIC’s director of apprenticeship and training. He said it’s been amazing watching the different ways the school’s female instructors will find to teach a certain concept if a student doesn’t understand it.

“They just find another way,” says Donaldson. “The collaborative work is amazing to watch. There’s no egos here – they are not afraid to either ask or share their knowledge.”

Donaldson says it’s also beneficial for male students to see female instructors in action because it smashes the stereotypes about women in trades.

And at the end of the day, everyone is in school for the same reason, says Hagen, summing up.

“We all become tradespeople for the same reasons. We want to work with our hands, provide for ourselves and our families and make an impact in our communities. When it comes to ability, gender and ethnicity are irrelevant. There is a long list of qualities that make a good tradesperson, and you are going to possess some of them and not possess others, but if you show up on time, work hard and have a good attitude, then you will have the opportunity to thrive in the trade of your choice.”