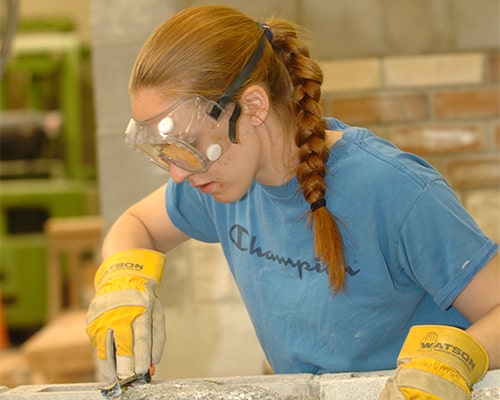 When Geoff Higginson talks about the trowel trades, his eyes light up.

“The beautiful tile mosaics, stone and brick work you see in Greece are millennia old,” beams Higginson, an instructor at the Trowel Trades Training Association in Surrey. In fact, mosaics are one of the earliest forms of art that still exist today.

President of the Bricklayers Local 2, Higginson started out his working life with a bachelor of arts degree and a job in the recreation field. Despite the “arts” part of his degree, the work wasn’t all that creative and so he went on a temporary work assignment as a bricklayer’s helper.

That was almost 35 years ago and Higginson’s never looked back.

“I was attracted by the artistic nature of the trade,” says Higginson. “To this day, it’s one of the most satisfying and creative pursuits I’ve ever been involved in.”

In addition to being part of the College of the BC Building Trades, the TTTA is affiliated with the Cement Masons Local 919. Business manager of the local, Roy Bizzutto jokes that cement is “in his blood” since his father was a concrete foreman.

Initially, Bizzutto was training to be a mechanic but due to a downturn in the economy at the time, he ended up helping his dad at work on the weekends in order to put cash in the bank. He liked the work so much that he stayed.

“I liked being outdoors and the physical nature of the job,” said Bizzutto.

The trade took him all over British Columbia, to the Northwest Territories and as far as Brandon, Manitoba.

“I really loved it and I got to meet so many great people.”

Cement masons are key in building ice rinks, and Bizzutto has helped put in a fair number. Though he wasn’t on this particular job, he gains a certain satisfaction knowing that his members helped install the ice rink at Michael Bublé’s house. If you’re interested in trowel trades like bricklaying and concrete finishing, visit ttta.ca.